There are many sea turtles around the Gilis and Lombok. They are so abundance that it is rare to do a dive without meeting one. Often, it is possible to dive with ten turtles.

There are two turtle species living in north-west of Lombok – Gili islands:

The 2 species (like all the sea turtles) are endangered, they already disappeared in many places because of fishing, nets, collecting eggs, beach full of tourists…. For example, they are rare in Bali.

Before to explain how to recognize them, I will try to explain why they are abundance around the Gili islands.

Why are there so many Hawksbill and Green turtles around Gili islands?

The answer is easy : the human do not hunt them anymore and begun to protect and help them to grow.

The local people understand they can earn more money from tourism if there are many turtles, so :

For the locals, using sea turtles is an easy and quick way to earn money :

The turtles are the main sea attraction for scuba diving in Lombok and gili islands.

This situation is precarious as long as a live turtle yields more money than a dead, they will be “protected”. If one day the tourism drops, the turtles could become again a source of calories or other (carapace…).

Indeed, turtles must serve a short-term interest, that is to earn money immediately therefore harmful but profitable attitudes persist :

Nevertheless, the result is there and it is probably the most important, these 2 species of turtles are numerous around the North Lombok and Gilis (a situation now rare in the world).

To easily discover Green and Hawksbill turtles, the northwest of Lombok is the ideal place. It is easy to see them.
And, to differentiate, these 2 species is not difficult.

How to distinguish a Green turtle and a Hawksbill turtle?

I will not be interested in the differences in shapes or numbers of scales, it is not a simple method to use.
And a Green turtle is not necessarily green (they have been named so because their flesh is greenish in color).
I only describe my personal methods to differentiate them, not a scientific description of these 2 species. For that, you need to check on Wikipedia.

2 simple basic criteria that are useful:

Their mouths are very different

The mouth of Hawksbill turtle looks like a beak of a bird :

The mouth of a Green turtle is flat (compared to Hawksbill) :

So a turtle with a mouth like a bird’s beak is a Hawksbill turtle.

Hygiene of the shell

Green turtles spend a long time cleaning their carapace. It is common to see them rub their backs against corals, artificial reefs…
As a result, Green turtles have a very clean shell.

Hawksbill do not seem to have this need for a regularly cleaned carapace.
As a result, their shell is often perceived as dirty.

A video about some sealife, we can meet during our scuba dives in Gili islands, Lombok, Indonesia : sharks, turtles, many fishes… The Ghost pipefish or Solenostomidae is a family of small fish (less than 15 cm) with a very good camouflage. It spends […] 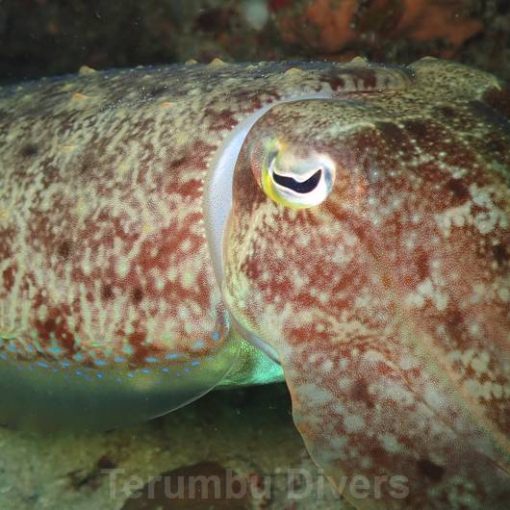 During our dives, often we meet cuttlefish and sometimes squid. This video shows these two stranges fishes.